So how many meaningful business relationships do you think you can handle? 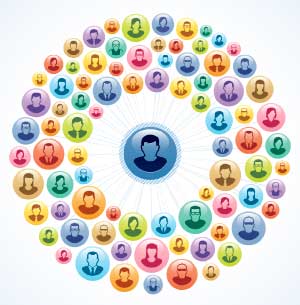 We’re probably all aware of the concept of ‘six degrees of separation’.  That we are all connected by six or fewer steps.  From a human perspective, in a world of 7+ billion people it sounds far fetched, however, having completed a course on social and economic networks I’ve seen the mathematical proof and been forced to work through it!

A lesser known concept is the ‘Dunbar number’, named after the anthropologist Robin Dunbar.  The theory goes that there are a finite number of meaningful relationships that we, as human beings, can maintain.  By meaningful, we mean a relationship that is underpinned by a real level of trust and obligation.  The number of relationships is driven our cognitive ability which is related to the size of the human neocortex.

Whilst, as with all profiles, there will be outliers, for most people the number is between 100 and 230, with the ‘Dunbar number’ being seen as a remarkably small 150.

When we look at both history and modern day examples there are some interesting analogies:

It’s one of those theorems that makes you sit up and think.  When I looked back through various aspects of my career and thought about it, many of the organisations where I’d spent time or interacted with, and which I felt we’re well performing teams where no bigger than 150 people.

Now, we have to be careful of ‘confirmation bias’ creeping in here, however, there are wider examples of successful organisations, such as W.L. Gore & Associates, who consistently win awards in relation to being a good place to work, and where they have a concept that when teams get to a size not dissimilar to the Dunbar number they split.

So, if we’re all constrained, to a greater or lesser extent, in terms of the number of meaningful relationships that we can cognitively process, and the world is becoming more complex and more interlinked, then do we have a problem?

Many of us are now used to technology giving us a helping hand in this area.  Social networking sites are increasingly ubiquitous, and form a new wave of communication mechanisms.  It’s not unusual for people to have hundreds, or thousands of ‘friends’ or ‘links’, however, as we all know in all likelihood social networking sites are acting as a huge ‘Rolodex’ for many users in this context.

It’s possible that for the savvy users, who likely have more than 150 contacts, the real role is to help them keep track of their contacts, their interconnectedness, and their connections.  Whilst this could be seen as a self-managing address book, the most progressive of operators in this space will be leveraging the platforms to understand how they can create networks around opportunities and my guess is that these sub-networks will be no more than 150 in size.

As we come to the end of the mass adoption phase in relation to social networks, those that maintain their appeal will be those that provide analytics and visualisation for users in these areas.  Helping them to see connections and clusters relative to a challenge or opportunity.

After all we’re going to need all the help we can if we are truly limited by the size of our neocortex.